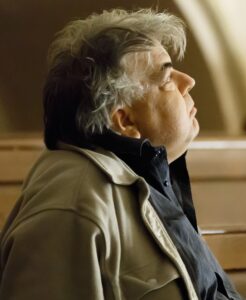 Mr. Desmarais has obtained at the Conservatoire de Hull and Montreal, a First Prize in Piano and First Rrize in Chamber Music.

He won the International Competition French chamber music “Prix Henri Sauget” (France 1991), Second Prize in duo with violinist David Lefèvre. Following this contest, this violin-piano duo also distinguished himself by winning the Foundation Prize Yehudi Menuhin in Paris (1991). Their recording of the Sonata of Henri Sauguet caught the attention of international critics.

He was invited as a coach and tutor by the Canadian Opera Company for several opera productions including Carmen, Zauberflöte, Rusalka, War and Peace, Pelléas et Mélisande and  Massenet’s Don Quichotte.

Sought after as a performer of contemporary music he has performed an extraordinary number of works by Canadian and International composers. In July 2016, he played the world premiere of a piano concerto written for him by composer Simon Bertrand, commissioned by the Orchestre de la Francophonie and conducted by  director Jean-Philippe Tremblay.

He was a Member of the Pierrot Ensemble conducted by David Currie.

One of the most respected teachers in Canada, his students have won national awards and gone on to study in major music schools including the Sorbonne (Paris), the Cleveland Music Institute, the Manhattan School of Music, the Hochschule Stuttgart and to perform at Vienna Muzikverein and Carnegie Hall.

His concert recordings have been heard on the airwaves of European Radios, Radio-Canada with excellent reviews.

As a clinician and judge he has served on juries of several national competitions and the Canada Council for the Arts.

In 2007, he was the only Canadian pianist invited to play in recital at the Tchaikovsky Conservatory in Moscow to commemorate the 50th anniversary of the famous recital of pianist Glenn Gould.

Mr. Desmarais was awarded the Commemorative Medal for the 125th anniversary of Canadian Confederation for his outstanding contribution to the arts in Canada and abroad.

Jean Desmarais was in residence at the National Arts Centre and among its many activities he plays the keyboard parts (piano, celesta, synthesizer) with the NAC Orchestra under the direction of its many conductors.

Desmarais over 20 years has continued to teach piano and coach singers and instrumentalists from his studio, many of whom now enjoy international careers and is a favoured teacher in many Summer Music Academies in Canada; Centre d’Arts Orford, CAMMAC, Camp Musical du Lac-St-Jean.