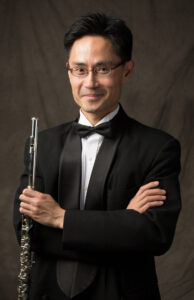 Canadian flautist Stephen Tam is equally comfortable as soloist, chamber musician or orchestral player, performing repertoire ranging from the baroque to the contemporary.

First-Prize Winner of the 32nd CBC/Radio-Canada National Competition for Young Performers, Stephen has appeared as concerto soloist in recent seasons with the Canadian Sinfonietta, the Ontario Philharmonic and Counterpoint Community Orchestra.  Past concerto engagements included collaborations with the Calgary Philharmonic, the Banff Festival Orchestra and the Toronto Senior Strings.  His performances have been broadcast on multiple occasions nationwide on CBC Radio and on Radio Television Hong Kong (RTHK).

As chamber musician, Stephen has performed at The White House, the Hong Kong Government House and the Ottawa Chamberfest, and will make his debut at the Toronto Summer Music Festival in 2022.  He also frequently appears in chamber concerts at the University of Toronto’s Thursday Noon Series and Western University’s Faculty Concert Series.  Highly regarded as interpreter of contemporary music, Stephen is a regular guest of the Array Ensemble, Contact Contemporary Music, New Music Concerts, Toca Loca, the Toronto New Music Projects and 5-Penny New Music Concerts (Sudbury).

Stephen is currently the principal flute of the Canadian Sinfonietta, and regularly serves as principal flute with many orchestras and choral groups around Ontario, including the Toronto Mozart Players, the Toronto Concert Orchestra, Pax Christi Chorale and Cantores Celestes.  He has appeared as guest principal flute with the Kitchener-Waterloo Symphony, the Niagara Symphony and the Theatre of Early Music, and has also performed with the Cleveland Orchestra and the Ontario Philharmonic in past seasons.

A dedicated and highly-respected teacher, Stephen is a flute faculty member at both the University of Toronto’s Faculty of Music and at Western University’s Don Wright Faculty of Music.  He also maintains a private studio in Thornhill, Ontario.