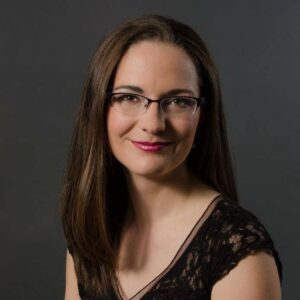 Elizabeth Loewen Andrews is a core member of the Hamilton Philharmonic Orchestra. She leads a dual life in  performance, playing both modern violin and Baroque violin. Although formally trained in modern performance, Elizabeth was able to delve into the world of period performance while she was completing her Masters degree at the University of a Toronto. When not performing in Hamilton, she can often be found joining the members of Tafelmusik Baroque Orchestra on their stage, or performing contemporary music with Esprit Orchestra.

If you had to ask Elizabeth about her favourite part in performing music as a career, she would probably say everything. Elizabeth loves to share a wide range of music with audiences, and she tends to throw herself wholeheartedly into all of it! She also feels strongly that it is a privilege as a musician, to be able to affect people at a deep emotional, and even spiritual, level when she performs. Elizabeth aims to bring this same energy and inspiration to her teaching studio, so her students can experience the transformative power of music.

When Elizabeth is not rehearsing and performing, she can usually be found in her home in West Scarborough. There, she teaches violin sometimes, chases after her kids a lot, sometimes does some yoga, sneaks in some gardening and almost always finds time to do some cross stitch or embroidery for relaxation at the end of the day.