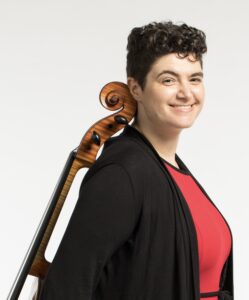 Rachel Desoer is a Canadian cellist. She studied at the Juilliard School, Oberlin College, McGill University and the Banff Centre. She graduated from Oberlin in 2008 with a Bachelor of Music degree.

Rachel was the cellist of the Cecilia String Quartet from 2010 to 2018. In this ensemble Rachel toured extensively around the world, recorded 4 albums on the Analekta label and taught chamber music at the University of Toronto.

Touring has allowed Rachel to perform at such inspiring venues as Wigmore Hall, The Concertgebouw (Amsterdam), Konzert Haus Berlin and many more. The Cecilia Quartet also made educational programming a priority and performed hundreds of presentations for schools. In 2014, the quartet created a concert series called Xenia concerts specifically designed for children on the autism spectrum and their families. Exemplifying their commitment to the equal representation of women in music, Rachel spearheaded the commissioning of 4 string quartets by Canadian women composers in 2016.

Rachel continues to play recitals and concertos with orchestra regularly. She has worked in orchestras, most notably, the National Arts Centre Orchestra and the Canadian Opera Company. Currently, Rachel is the principal cellist of Symphony Nova Scotia.

Rachel plays the 1929 Carlo Guiseppe Oddone cello generously on loan to her from an anonymous donor.