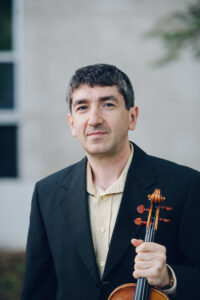 Oleg Pokhanovski is a top prizewinner of eight prestigious international violin competitions including the Paganini in Genova, Sarasate in Pamplona and CIEM in Geneva among others, and was First Prize Winner of the 1990 Scheveningen International Violin Competition. He is also a twice recipient of the prestigious Canada Council National Career Development Grant, as well as a multiple recipient of Conceil des Arts du Quebec and Manitoba Arts Council Grants.

Pokhanovski has performed in the U.S., Canada, Europe, Israel and Russia, giving over 2000 concerts in total. He has been presented in the Carnegie Recital Hall, the Grand Hall in Moscow, the Concertgebouw, Knight Hall in Prague, Place des Arts in Montréal and others. His solo appearances with orchestra included the Moscow Philharmonic, Moscow Virtuosi, The Hague Symphony, Toronto Symphony, Montréal Symphony and Winnipeg Symphony orchestras. His concerts brought rave reviews claiming him “Russian Paganini” and describing his playing as “brilliant”, “phenomenal”, “outstanding”, and “extraordinary”. He has also been invited to perform on national television and radio in Russia, Serbia, Poland, Canada and the Netherlands. Mr. Pokhanovski is active as a chamber musician and has appeared in the International Virtuosi Series in Germany, International Music Academy in Kiev, Ukraine, Domaine Forget in Quebec, Centara New Music, Agassiz Summer Chamber Music, Orford and Pender Harbour Music festivals in Canada. He is a Founder and Artistic Director of the “Oleg and Friends” concert series in Winnipeg.

Dr. Pokhanovski is also in much demand as a pedagogue and presently holds the position of Professor of Violin at the University of Manitoba. He adjudicates music festivals all across Canada, both strings and piano categories.

Oleg is a member of the Desautels Piano Trio with colleagues Minna Rose Chung (cello) and Judy Kehler-Siebert (piano). The Trio has performed numerous concerts in Canada and abroad.

Oleg Pokhanovski made over 200 virtuosic transcriptions for violin and piano, as well as other instruments: https://soundwavecompany.com/collections/instrumental-solos

https://www.sheetmusicplus.com/publishers/oleg-pokhanovski-sheet-music/3017043?isPLP=1 Many of them can be heard on his CDs: The Mirror Image and La Valse. He continues to make new transcriptions and performs them with an international prizewinning pianist Scott Meek.

Pokhanovski’s deep admiration for the great musicians of the past, Heifetz, Hofmann, Rubinstein, Milstein, Kreisler and others is evident in his sensitive, passionate style of playing. “Pokhanovski’s high-energy performances are characterized by an unmistakably genuine passion for the music. Urgent, serious and heartfelt – all words that aptly describe Oleg Pokhanovski’s playing” (Gwenda Nemerofsky, Winnipeg Free Press.)