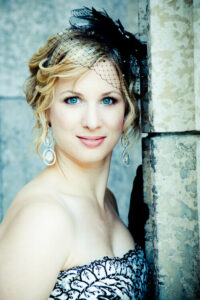 Recently hailed for her “tour-de-force performance” (Winnipeg Free Press) in the title role of Manitoba Opera’s Susannah, Lara has established herself as a dynamic, intelligent, and moving singing-actress.  Her facility for fully transforming into a character, regardless of genre, has earned her the reputation of being an artistic chameleon.

In addition to the title role in Manitoba Opera’s Susannah, the 2019-20 season saw Lara as Lauretta (Gianni Schicchi) and Suor Genovieffa (Suor Angelica) for Pacific Opera Victoria’s Il Trittico, as a soloist for the Victoria Symphony’s Messiah, and make her Edmonton Opera debut as the Countess (Le nozze di Figaro).

As theatres reopen, upcoming projects include Musetta (La Bohème) for Edmonton Opera, Beatrice (Three Decembers) for the Little Opera Company, rejoining the Victoria Symphony as a soloist for A Viennese New Years, a return to the NAC’s stage with Opera on the Avalon, reprising the role of May (Ours), as well as an appearance with the Agassiz Chamber Music Festival.

Lara is a voice instructor with the Desautels Faculty of Music at the University of Manitoba.  She holds a Master’s in Music (Opera) from McGill University, and a Bachelor of Arts – Honours (Voice) from the University of Winnipeg.  She is an alumna of l’Atelier lyrique de l’Opéra de Montréal, San Francisco Opera’s Merola Opera Program, the Janiec Opera Company at the Brevard Music Center, the Banff Centre, and Opera NUOVA.  She also enjoys gardening, is an avid walker, loves fabulous footwear, and is a self-professed prairie-girl forever.