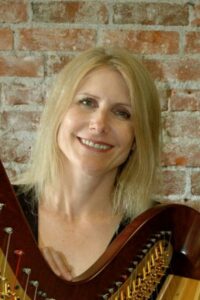 Jill Whitman received bachelor degrees in both harp performance and German language from the University of Washington, studying with Pamela Vokolek and Lynne Wainwright Palmer. After completing her master’s degree at Western Washington University in 1985, she toured for more than 15 years for the Community Concerts division of Columbia Artists throughout Canada and the United States with the trio Harps International and Winterharp. She won the American Harp Society Concert Artist competition in 1992, and has performed concerts in Germany, Austria, New Zealand, Norway and Chile. She currently serves as principal harp with the Bellingham and Yakima Symphonies, and has performed with the Seattle and Spokane Symphonies, Seattle Opera and Pacific Northwest Ballet. Jill performed and toured for several years with the American Sinfonietta and Bellingham Festival of Music.

She is professor of harp at Western Washington University. Jill is one of the pioneering teachers and clinicians of the Suzuki method for the harp, and her students have been featured in several World Harp Congresses across the globe. In addition, she is an avid arranger of Celtic music and carols and directs the chamber ensemble “NOEL”, featured in holiday performances in the Northwest. Jill and her husband Mitch have two lovely daughters who play the harp, viola and bass.