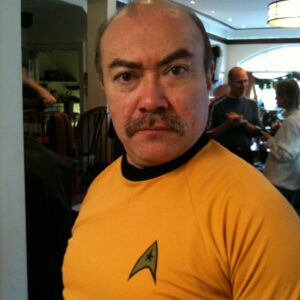 Born at the age of three, James showed an immediate precociousness for life. Before he could protest, young Jimmy was forced to take piano exams and eventually played in hundreds of music festival classes. (So he knows exactly what you’re going through.) There was Vancouver and Coquitlam Kiwanis (representing the latter and winning Provincials and Nationals in the 1970s), Burnaby Clef Society, and Student Performer’s Guild. At least he got to skip school for some of these events. Sadly though, Jim’s hockey career never took off, when a soft pedal ankle injury occurred just before the 1979 NHL draft.

After early studies with Keiko Parker and Edward Parker, Jamie studied with Kum-Sing Lee at both the Vancouver Academy of Music, and UBC, graduating from both in the 1980s with a major in Piano Performance, and a minor in Midnight Beach Fires. With the help of the Canada Council, Mr. Parker went to The Juilliard School to study with Adele Marcus, receiving his Masters and Doctor of Musical Arts degrees in the early 1990s. New York City still holds a special place in his heart, with fond memories of friends, concerts, museums, Zabar’s, and Gray’s Papaya at 2am.

While at UBC, Parker won the Eckhardt-Gramatté Competition as a pianist, and then collaborative pianist, resulting in his first amazing tours of Canada. During his time at Juilliard, Jimbo won prizes at the Gina Bachauer and Montréal International Piano Competitions, giving him the legal right to play concerts professionally.

During a ten-year span across his university years, Jimmy ‘Two-Shoes’ spent his summers at the Banff Centre, studying piano and canoeing with Marek Jablonski, chamber music and patient listening with Lorand Fenyves, and maximum intensity with Aldo Parisot. Coming full circle, Dr. Parker is now an Artistic Director of Summer Classical Music at Banff Centre. The Evolution: Classical and Evolution: Quartet programs were launched online in the spring of 2021.

In 1993, Parker-san agreed to ‘play a few concerts together and we’ll see where it goes’ with a couple of friends, and the Gryphon Trio was born. Twenty-eight years later, they continue to tour the world (aside from pandemic times), make recordings (they’ve won three Juno Awards), commission Canadian composers (dozens of works now), enjoy community engagement activities, explore multi-media collaborations, and teach.

Starting his university teaching career with seven delightful years at Wilfrid Laurier University, Professor Parker has been the Rupert E. Edwards Chair in Piano Performance at the University of Toronto since 2003. He enjoys sitting there, and working to help students find their true calling in a wonderful but exceptionally challenging career choice.

When not practicing, JP spends his time as host of the Parker News Network, and watching puppy videos. (But don’t tell his dog-wolverine crossbreed.) All things considered, the Jimster’s greatest professional achievement is that he doesn’t have to wake up early every day.