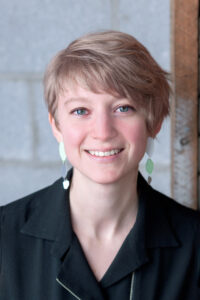 Devon Roulston is a drummer and percussionist based out of Stratford, ON.  She started out playing piano and a young age and eventually decided to switch to percussion lessons at 12 years of age.  While in high school, she played in the symphonic band, jazz ensemble, marching band and founded a percussion ensemble. She played in community ensembles such as the Stratford Concert Band, performed in the pit band for productions with the Community Players of New Hamburg and also competed in numerous Kiwanis Music Festivals, eventually making it to the National level in 2011 where she earned 2nd place.  After earning her Honours Bachelor degree in percussion performance from Wilfrid Laurier University, she was invited to play drums and percussion for productions with The Charlottetown Festival and Theatre Aquarius in Hamilton which included Bittergirl – the musical, It’s A Wonderful Life, and Joseph and the Amazing Technicolour Dreamcoat.  Currently, she plays drums for the rock duo, Atlas Effect, based in the Stratford area.