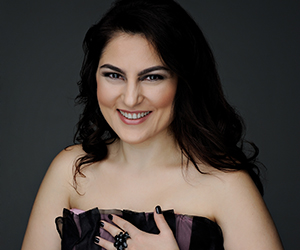 Described as having “a voice that is both fluid and expressive” (Opera News) and “a voice to watch” (Opera Canada), Turkish-Canadian mezzo soprano Beste Kalender’s first appearance at Carnegie Hall was in 2017 as part of the Spotlight Recital Series, after which she was featured as the Artist of Month by Musical America Worldwide. She returned to Carnegie Hall in 2018 for the Marilyn Horne Song Celebration, along with internationally celebrated artists such as Isabel Leonard, Nicole Cabell, Warren Jones and Lester Lynch.

A frequent performer on concert and opera stages internationally, Beste has recently performed at Opera San Miguel (Mexico), Helikon Opera (Russia), Bolshoi Theatre (Belarus), Teatro Comunale di Bologna (Italy), Sori Festival (Jeonju, Korea) and Les Chorégies D’Orange (France), as well as in various productions in Canada with companies such as Edmonton Opera, Calgary Opera, Opera On The Avalon, Against The Grain Theatre, Toronto Operetta Theatre, Voicebox: Opera in Concert, Brott Music Festival, Banff Centre etc. She made her professional debut in the title role of Bizet’s Carmen with Calgary Opera, where she was a member of the Emerging Artist Program. Her dramatic participation on the opening night was widely acclaimed in the media: “..On one hours’ notice, mezzo-soprano Beste Kalender, originally scheduled to sing the role of Mercedes, learned that she would have to sing the title role. This she did, and with remarkable success…” (Calgary Herald). Her American role debut was with the title role in La Cenerentola by Rossini at Music Academy of The West.

Among her accolades, Beste is a recipient of the 2015 & 2017 Canada Council for The Arts Grant for Professional Musicians, she has been named Jeunes Ambassadeurs Lyriques in Canada (2013-2019) and won the 2016 Sylva-Gelber Foundation Award, the 2018 Inaugural Stuart Hamilton Memorial Award and most recently, the 2019 Prix Jeune Espoir Lyrique du Canada from Théâtre Lyrichorégra 20 Jeunes Ambassadeurs Lyriques. Beste holds an Artist Diploma in Voice from The RCM’s Glenn Gould School as well as a Master’s Degree in Developmental Psychology from University of Toronto where she studied music cognition. Beste is also a music development teacher for little kids, and currently running a bi-lingual (Turkish and English) video project of tunes and tales with puppets, an endeavor she started during the lockdown to entertain and educate little children stuck at home.