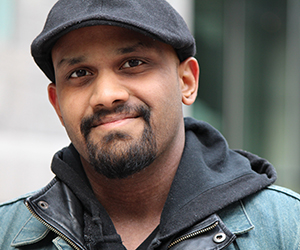 With tastes ranging from baroque music to death metal, Toronto-based cellist Amahl Arulanandam is known for his musical versatility and ability to adapt to many different genres. Feeling at home in studios, small clubs and large concert-halls, Amahl hopes to convey that musical expression is beyond genres and labels.

In the “classical” realm of Toronto, Amahl is quickly becoming known as a strong advocate for the music of our time, performing with ensembles such as Soundstreams, New Music Concerts, Tapestry Opera, FAWN Chamber Creative, Caution-Tape Sound Collective, Thin-Edge New Music Collective (TENMC), Music in the Barns and Esprit Orchestra, as well as regular appearances at the 21C Music Festival. In his time with these ensembles, he has had the opportunity to work closely with leading composers such as Salvatore Sciarrino, Ana Sokolovic, Luna Pearl Woolf, Brian Current and John Rea.

As a soloist and chamber musician, Amahl has presented several recitals and performed alongside artists such as David Geringas, Robert Aitken, John Novacek, Steven Dann, Angela Cheng, Mark Fewer, James Campbell and Jeffrey Beecher. He was a featured soloist with Esprit Orchestra, performing the world premiere of Bekah Simms’ cello concerto Foreverdark, for which he was the dedicatee. He has toured the US with Matt Haimovitz’ all-cello ensemble, Uccello and been a featured artist at the Salzburg Chamber Music Festival, Ottawa Chamberfest and Sweetwater Music Festival. He was a semi-finalist in the 2015 Eckhardt-Gramatte National Music Competition, and performed Barber’s Cello Concerto with the McGill Symphony Orchestra in the fall of 2014. Mr. Arulanandam is a co-founder VC2 Cello Duo alongside friend and colleague, Bryan Holt. VC2 has performed all across Canada, and recently completed a tour of the Prairies presented by Prairie Debut.

Amahl completed his undergraduate studies in 2012 at the University of Toronto under Shauna Rolston where he received the Gabriella Dory Prize and Suba Institute Award as top graduating performance major. He received his Master’s degree from the McGill University under Matt Haimovitz where he, as part of the Strathcona Piano Trio, won the 2013 chamber music competition, and was runner up in the 2014 concerto competition. He wrapped up his studies at the Glenn Gould School where he received an Artist’s Diploma and was winner of the 2015 chamber music competition.