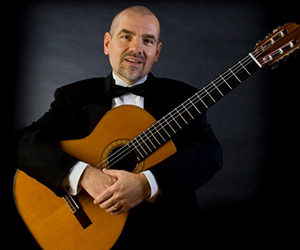 Canadian guitarist, conductor, composer, arranger and educator Timothy Phelan has performed in Canada, the USA, Mexico, Cuba, Martinique, Europe, Scandinavia and China. A native of St. Catharines, Tim made his CBC debut recording at the age of eighteen as concerto soloist with Orchestre Symphonique de Québec, and he has since been heard in solo, concerto and chamber music broadcasts over CBC Television & Radio, Radio France, Radio Caribbean, Cuban Radio & Television, and Mexican Radio.

For more than two decades, Tim’s dedication to the field of music education as a secondary school music teacher left little room for classical guitar performance. A conducting injury in 2006 resulted in loss of feeling in his hands, and the subsequent inability to play the guitar for a period of two years. Upon recovery, Tim made the decision to retire early from his teaching position and to rededicate himself to the guitar. He is now a regular guest soloist, conductor, teacher, lecturer and competition jury member at international guitar festivals in Canada, the USA, Mexico, Scandinavia, Europe and China, in addition to mentoring a new generation of guitarists through his teaching at both Brock University and his private studio.

A passionate and accomplished chamber musician, Tim enjoys duo collaborations with celebrated musicians such as fellow Canadian guitarist Emma Rush, Niagara Symphony Principal Flutist Doug Miller, violinist Julia Wedman of Canada’s revered Tafelmusik Baroque Orchestra, and with Swedish cellist Kristin Malmborg in AuroraPolaris Cello & Guitar Duo. Tim is also a member of The Gallery Players of Niagara, performing with, among others, the Eybler String Quartet and members of Tafelmusik, and he has been involved in the performance and acclaimed recording of new transcriptions of Schumann song cycles for voice, strings and guitar, with world-renowned Canadian baritone Brett Polegato.

Tim is a prolific arranger of music for solo guitar, guitar ensemble, and chamber music combinations of guitar with various other instruments. Much of his work as a composer has been dedicated to expanding the repertoire for guitar with choir, and he has collaborated with many of Canada’s finest choral ensembles, even writing for choir with symphony orchestra and guitar (premiered with conductor Robert Cooper, Chorus Niagara and the Niagara Symphony). Most recently, Tim has been composing newly commissioned works for guitar orchestra, and conducting their premieres in Sweden, Germany and Mexico.