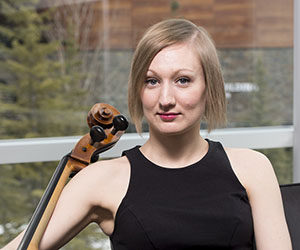 Canadian cellist Sonya Nanos charms audiences with her brilliant and imaginative tone. Her diverse career has included performances with ensembles such as the Orlando Philharmonic and Quartetto Gelato, as well as artists like Michael Buble and Andrea Bocelli.

Sonya has been featured in The Walleye Magazine, the Thunder Bay Chronicle Journal, and has been broadcast nationally on the CBC Radio. Her orchestral recordings include Berlioz’s Symphonie Fantastique (Analekta), the complete symphonies of Brahms (StulOF) and a Juno-nominated album of Canadian works with the Thunder Bay Symphony Orchestra (Analekta). She can also be heard as soloist on an album of orchestral works by American composer Paul Reale.

As an active chamber musician and recitalist, Sonya has been featured on the Lumina series at Lakehead University, Consortium Aurora Borealis, and as a guest on Western University’s Faculty Chamber Series. She was a prize- winner
in chamber music competitions at Lynn University and the Glenn Gould School. She has premiered chamber compositions by Greg Sandow (in Suk Hall, Prague), Alfredo Cabrera and others. She has also performed and taught at the Festival International de Musica in Loja, Ecuador.

This Fall, Sonya begins her first season as a member of the Niagara Symphony Orchestra. Previously, she was section cellist with the Thunder Bay Symphony Orchestra and on Faculty at Lakehead University. She has also appeared with the Orchestra London (now London Symphonia).

Sonya holds a Masters of Music from Lynn University where she was awarded the M. Elizabeth Maddy Cumpton Endowment Award for the “outstanding conservatory student of strings”, an Artist Diploma from the Glenn Gould School, and a Bachelor Of Music from McGill University. She has attended festivals including Meadowmount, The National Academy Orchestra, Domaine Forget and completed two Banff creative artist residencies. Her teachers include David Cole, Thomas Wiebe, John Kadz, David Hetherington and Matt Haimovitz.