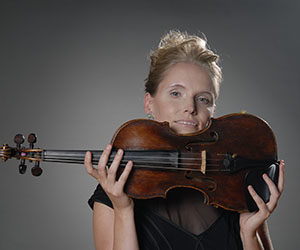 Megan Jones earned a Bachelor of Music in Violin Performance from McGill University in the year 2000, graduating with high distinction. Megan currently plays as a regular substitute violinist with the Hamilton Philharmonic Orchestra and occasionally with the Windsor Symphony Orchestra, the Kitchener Waterloo Symphony and several other orchestras across Ontario and Quebec.

She acts as a mentor with the National Academy Orchestra under maestro Boris Brott and is the orchestra manager and librarian for the Brott Music Festival. Over the past decade Megan has performed several solo concertos with the Deep River Symphony Orchestra, the Timmins Symphony Orchestra and the Kitchener Waterloo Chamber Orchestra including a complete performance of Vivaldi’s Four Seasons.

Most recently Megan had the opportunity of recording with the McGill Chamber Orchestra in Maison Symphonique as a violinist in the orchestra. Megan has been guest concertmaster for the Mississauga Symphony Orchestra, Symphony on the Bay, the Georgian Bay Symphony and Orchestra Toronto and currently holds the position of concertmaster of Sinfonia Ancaster.