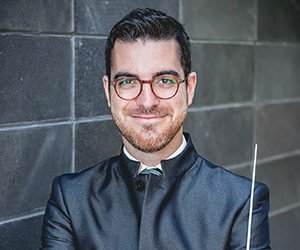 Dylan Rook Maddix is Professor of Music at Cambrian College in Sudbury, ON, where he conducts the wind ensemble, teaches music theory and serves as the head of winds and brass studies. Dylan is founder and artistic director of the Toronto Winds, host of the podcast The Band Room, and maintains an active career as a sought-after conductor, clinician, performer and adjudicator across Canada.

His musicality has led him to numerous festivals in Canada and the United States including the Scotia Festival of Music, Charlottetown Festival, North American Brass Band Championships, Indian River Music Festival, Bathurst Chamber Music Festival, Music Fest Canada and the Luminato Festival. He is a prizewinner at the 2011 & 2014 National Music Festivals and has been a featured soloist with the Prince Edward Island Symphony, Weston Silver Band, Greater Moncton Chorale and Orchestra, and Strathgartney Chamber Orchestra. Dylan holds a Master of Music from the University of Toronto and a Bachelor of Music from Mount Allison University.