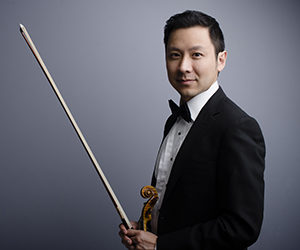 Whether he is performing at The Mozarteum in Salzburg, Disney Hall in Los Angeles, Carnegie Hall in New York, or Qingdao Hall in Shandong, China, Canadian violinist Conrad Chow is at ease performing music of many different centuries, continents, and styles. A communicator, he delights in forging strong connections with his audiences: Critics have described him as a “world-class talent” [Escarpment Views] who performs with “intense passion … leaving the audience deeply intoxicated and spellbound” [Changshu Radio].

“Chow shows off a nice balance between technique and musicality in a program that alternates between fireworks and sweet expressiveness.”
– The Toronto Star

“Conrad Chow is a voice of distinction, impeccable in technique and a most vivid painter of tone. He has a glorious sound and handles
each of these works as if he was born to them.”
– Gapplegate Music Review

Conrad Chow is in demand as a performer as well as an educator. An active chamber musician, he has perfected his craft with the Grammy® Award-winning Emerson String Quartet. Recent seasons have included a recital at Toronto’s Koerner Hall and regular appearances with the prestigious iPalpiti Chamber Orchestra in Los Angeles, in addition to teaching engagements and presenting masterclasses at the Summit Summer Music Festival in New York; Shandong College of Arts in Jinan, China; Seattle University; University of Toronto, Chinese University of Hong Kong, and Eilat Chamber Music Festival in Israel. During a recent six-concert tour of China, he performed the beloved Butterfly Lovers Concerto with the Ontario Festival Symphony Orchestra.

Conrad Chow earned bachelor’s and master’s degrees at the Indiana University School of Music, studying with Miriam Fried; his DMA is from the State University of New York, Stony Brook, where he studied under noted violinists Pamela Frank, Ani Kavafian, and Philip Setzer. He pursued post-doctoral work with Eduard Schmieder in Philadelphia. He currently teaches on the faculty of the Phil and Eli Taylor Performance Academy for Young Artists, at the Canadian Royal Conservatory of Music and has served Visiting Professor residencies at the University of Jinan, College of Music in Shandong, China, Dalhousie University in Halifax, Canada, and Temple University, USA. He has appeared on the juries of various national and international competitions, including most recently at the Remember Enescu International Violin Competition, in Romania. Students of Dr. Chow have gone on to win international competitions in Canada, USA, Romania, and the Czech Republic as well as performing with major symphony orchestras.