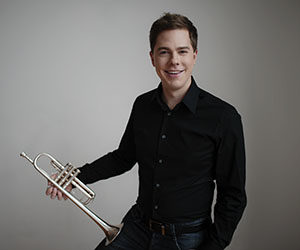 Trumpeter Aaron Hodgson has been praised for his “exquisite musicianship and assured composure” (International Trumpet Guild) and his “outstanding lyrical trumpet playing” (Hartford Courant). A prize-winner in the Ellsworth Smith and OSM Standard Life competitions, Aaron has been broadcast nationally by CBC Radio and featured as a concerto soloist with l’Orchestre de la Francophonie at Canada’s National Arts Centre. He can be heard on Naxos and Analekta records as principal trumpet for recordings of Bach’s Magnificat, Berlioz’s Symphonie Fantastique and the complete symphonies of Beethoven and Brahms. His debut solo CD Inner Voice was released on Blue Griffin Recordings in 2017.

Committed to expanding the trumpet’s capabilities and audiences, Aaron is a founding member of the Reveille Trumpet Collective. Reveille has presented engaging, multimedia performances at the Banff Centre and the Sound Symposium Festival, and contributed to the commissioning of many new solo and chamber works for trumpet. Aaron is also a member of Reverb Brass, a quintet dedicated to exciting performances of contemporary works. After several years at Memorial University of Newfoundland, in 2012 Aaron joined the faculty of the Don Wright School of Music, Western University. Aaron holds a Doctor of Musical Arts from Yale University.