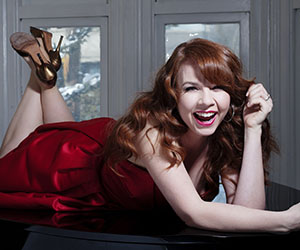 Innovative, bubbly, and comedic educator and singer Kyra Millan has created many hilarious, interactive and inviting shows about opera. (Having been commissioned seven years in a row to create family shows for the Canadian Opera Company led to Kyra creating a musical comedy duo, Millan & Faye with collaborative pianist Tina Faye.)

This season, the opera comedienne toured as one part of “Millan & Faye” throughout Ontario, performing at The Four Seasons Centre, Hugh’s Room, the Cornwall Concert Series, Richmond Hill’s Performance Centre, Welland-Port Colbourne Concert Society, Muskoka Concert Association, and Hamilton Philharmonic’s “What Next Festival”, Weefest, and most recently Chamberfest 2017. This fall, Millan & Faye will embark a three-week tour throughout Northern Ontario.

Kyra’s work in arts education began many years ago, facilitating opera workshops for the Canadian Opera Company, as well as being musical director of their “Summer Youth Intensive” training program, and many summer camps. Since then, she has worked in more than 200 schools for both the Toronto District School Board and the Toronto Catholic District School Board, teaching workshops as a guest artist/educator on behalf of the Royal Conservatory of Music, Opera Atelier, and the Canadian Opera Company. Other arts organizations in which Kyra has led workshops and training programs include Workman Arts (CAMH), Abilities Arts, Kiwanis, Soundstreams Canada and, most recently, TIFF.

Kyra’s first love is teaching, and she continues to do so at her studio in Toronto, where she lives with her family.