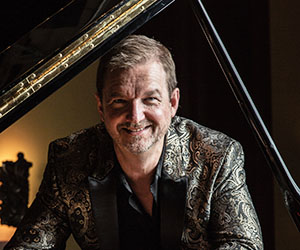 As an award-winning concert pianist, Clark Bryan has performed internationally, recorded 14 CD’s and has been featured on radio and television. As a teacher, Mr Bryan has taught thousands of students, adjudicated more than 60 music festivals coast to coast in Canada, given dozens of workshops and written a book “Gateways to Learning and Memory”.

The founder of The Aeolian Performing Arts Centre, Clark believes that everyone should have universal access to music, art and culture. Because of this belief, he launched El Sistema Aeolian in 2011. This free, intensive music program has offered hundreds of children and youth an opportunity to experience the joy of a rich musical experience. In 2016, Mr. Bryan secured Bishop Cronyn Memorial Place, a second facility to develop an education centre. Shortly after securing this facility, he co-founded two new programs. Pride Men’s Chorus London is a choir open to men of all backgrounds and identities. Rebelheart Collective is a conductor-less chamber orchestra that offers mentorship to young apprentices and offers free tickets to every concert.

Mr. Bryan is engaged in community activism and speaks regularly at events, on radio and television and has given a TEDx talk about the power and joy of music study.

He has been awarded Musical Personality of the Year (2005), Jack Richardson Award for Community Contribution (2011). In 2017, Mr. Bryan was awarded the Western Alumni Award of Merit and inducted into the Don Wright Faculty of Music Wall of Fame.

Mr. Bryan looks forward to a future when everyone has access to the arts and he is committed to making the changes necessary to accomplish this!